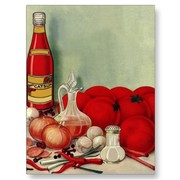 This is a space for you to post your ideas for creative things to do with food. They can be exotic or everyday goodies. You may also feel free to ask questions about the craft of cooking here. Food is ART!

You need to be a member of Creative Cooking to add comments!

No buns. It's a low carb meal.

Actually, it was almost 4 years ago, now.

Once a month, usually a Tuesday, a bunch of ladies, mostly from St. Philip, go out to dinner somewhere together. This practice started on the occasion of Bethann’s birthday two years ago. I had had a terrible staph infection on my neck and reactions to medications to treat it. Another lady had lost her husband in October. It had been a pretty grim time. A friend decided it would be a good time to have a good time. So a bunch of them took Bethann out to dinner. They had such a good time, they decided to do it again the next month, etc. It is now a regular event: Ladies’ Night Out.

So I got the idea to have a couple of the guys over to our house to make manly meals and watch manly movies while the ladies went out. We have watched “Monty Python’s: The Holy Grail”, “Napoleon Dynamite”, “Hannah”, “The Man Who Would Be King”, The Grammy Awards, a Leonard Cohen concert, a Bob Dylan documentary, etc. We have eaten “turtle burgers” (recipe by Southern Culture on the Skids), hobo hotdogs, veal steaks, stir fry and corn dogs. One night we ignited a tiny bit of bootleg, Greek Raki to prove that it was well over 50% alcohol. I concocted this recipe for one of those nights. It was a hit. I made it for Bethann and Hilary later. They loved it, too. This is especially amazing, because Hilary says she doesn’t like avocados or feta and it contains both. I told her they cancel each other out. She said they must, because she claimed the leftovers for her lunch.

In a large skillet, fry up the hamburger and the chopped onion. If there is a lot of fat; drain some of it. Add the peppers, mushrooms and corn. Add the spices. Be liberal with the cilantro. It’s good for you. Stir and cook them until the peppers start to get a bit juicy, but not mushy. Add the avocados. Cover and let them get warm. Top with the feta and serve.

I made this last night.

This week, on Halloween, my granddaughters gave me their small pumpkins to cook for the homeless people. A local farmer gave us a big box of broccoli and cauliflower. I looked around to see what I had around the kitchen and I made our vegetable side dish for Thursday night. I washed and scrubbed the two small (~ 10″ pumpkins), cut them in half and removed the seeds. I cut them up and put the chunks into the large turkey roasting pan, and threw a generous amount of nutmeg on them. I put a little bit of water in the bottom of the pan and covered it and put it in the oven to roast a t 350°. Then I peeled a yucca root and cut it up into pieces and peeled a 3″ piece of ginger root and added that in to roast.

While that was roasting, I cut up three large heads of broccoli and about half that much cauliflower. Once the yucca root was fork tender, I took it all out of the oven and put the first portion of the mix into the food processor to puree along with some of the pieces of the half of the large celery root I had cut up. I transferred the rest into the lid of the roaster, dumped the broccoli and cauliflower into the bottom of the roaster and poured the pumpkin sauce over it. The next batches of purees included more pieces of the celariac as well as a couple of sprigs of fresh sage and a handful of fresh parsley, Each time I poured the sauce over the vegetables in the roasting pan.

I then added about a cup and a half of water, covered it, and put it in the oven at 200° for a couple of hours, until it was time to load up to go to the city.

They did not know what to make of it. No one tried it, until someone told them that I made it. I have a rep on the parkway. After a few people tried it and passed the word, it went like hotcakes. No complaints!

A note to cindi a. morgan: Sorry I didn't see your question here in August, Cindi - I can barely keep track of my e-mail! About my potluck Vegan Basmati Rice Dinner - I bring it warm in plastic containers in an insulated bag and it usually is warm enough for everyone when I get there. (Since potlucks tend to only get hot food when someone brings a pizza, this is a nice addition.)

We had some dried beans to use up and some canned. That’s why beans are listed twice in the recipe. It is better with dried beans, so that they can be boiled with the Turmeric in the water to soak up some of the flavor. Soak the the beans. Saute’ the Tomatoes in Olive Oil. With each skilletful, blend in some Onions, Frying Peppers and some Garlic. Saute’ until tender. Then place them in the large roasting pan, and do the next batch, until all of them are done. Boil the beans with the Turmeric in the water. Use extra water to be able to add the Quinoa. Toast the Quinoa in the skillet in some Olive Oil to bring out the nutty flavor. They should just bounce a little and smell toasty. Don’t burn them. Add them to the beans and boil for at least 15 minutes and until the beans are tender. Add this mixture to the roasting pan along with the other beans and the remaining spices: Paprika, Cumin, Oregano & Black Pepper. Stir it all thoroughly together. Cover it with the lid or with aluminum foil. Place it in the oven at 200° for a few hours.

We go through a lot of spices. I like to use fresh ground, black pepper. It is better for you and more tasty. We don’t have the budget or the space for those ornamental, high end pepper grinders, but to constantly be buying throwaways from McCormick isn’t that economical or ecological either. Here is a solution:

(Now I think I have the hang of this Comment Wall.)

I do a lot of cooking in LARGE quantities for the homeless, so I have recipes that I have written, several of them vegan, for serving 250 to 200 people on one blog http://www.thekingsjubilee.org/

Click the word recipe in the tag cloud to find them.

I have some family scale recipes from our "Men's Night In" on another blog http://www.shoutforjoy.us/

I love to cook with avocados.