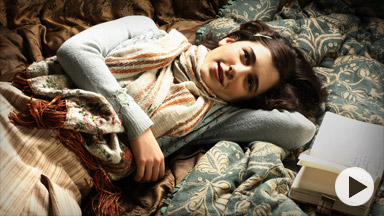 I just watched “The Diary of Anne Frank” on PBS. I found myself in a bit of a teary puddle afterwards, and a memory came to me.

When I was a very little girl, our next door neighbor lived only a driveway’s width away from our house. A whole family lived there, but the person I remember most was named Joanne. I didn’t know her well, but she played a role in our home.

Our house wasn’t large, but there always seemed to be alot of people in it. And they were usually busy doing something. So it wasn’t uncommon for my older sister to be typing something with the window open in her bedroom while my other sister entertained some friends down in the living room, as my little friend and I watched cartoons in my parents’ bedroom. In the middle of this an uncle or a cousin was sure to stop by unannounced at some point to drop off or pick up something. And on the afternoons when all of this was happening at once and the windows were open, the phone would often ring. Then my mother would appear and begin closing windows When asked why the answer was always “Joanne is nervous. Let’s keep it down”.

I was pretty young and finally got a little fed up that this Joanne person had enough power in our house to require me to miss The Flintsones. So I finally let my mother know I wasn’t too happy about this, and who cared what Joanne wanted anyway? “Joanne was in a concentration camp during the war. It’s the least we can do.” was the answer. I didn’t know what that really meant, but my mother said it in such a way that I knew Joanne won, The Flintstones lost.

One day my father came home tickled giggly that he had found a second hand Mercedes at a really good price and just spontaneously bought it. He kept staring at it and being an engineer kept talking about the fine engineering that went into a car like that. He adored that car. I barely remember what it looked like. About two weeks into us owning it I vaguely remember my mother telling my dad to pick up the phone. Joanne was asking to speak to him. It wasn’t usually good news when Joanne called, so I remember us kind of standing around. When my dad hung up he said, “Well, I never thought of that. Joanne asked me to park the car further up the driveway so she didn’t have to see the emblem.” My sister asked what that had to do with anything, and my dad said, “It reminds her of the Germans. To her it’s a sign of fear..” And I remember the next day the car was gone. When I asked him why he said he didn’t serve in that war to come home and terrorize his neighbor. It was just a car. And I remember him pretty happy to get rid of it. He said he didn’t want it anymore.

The last memory I have of Joanne was one night I was told to be a good girl, the neighbors were coming over. I remember thinking this is good. Nobody is going to be forcing the tangles out of my hair tonight. I wasn’t shoved upstairs, though. In my house all the drama always seemed to happen right out in the open. It turns out the Joanne House was in a complete hysteria and called my parents for help. All hell broke lose when their son had found a wonderful girl to marry. And he had brought her home. What he didn’t tell anyone until that night was that she was the German teacher at the local high school, and she was hired due to her native accent. I don’t remember the conversation. I just remember alot of crying and yelling going on between the parents and the young couple with my parents running interference. And then I remember Joanne screaming “NO NO NO!” And then my dad said, “No, Joanne. They are going to build a NEW world. The kids are going to build a NEW world!”. I remember that like it was yesterday even though I hadn’t thought of it in years. The movie made me remember.

So I’ve just watched Anne Frank and all that she left undone. . And I ask myself are we building a new world? And then I wonder if we are even as good a neighbor to each other as they were back then? And I’m grateful for the memory which makes me want to do better.

Comment by wiffledust on May 28, 2010 at 9:27am
oh thanks so much for checking this out, kathy. he really was a great man, but in his mind this is what normal people just DO. and really, it IS what we should all do, right? care about our neighbor? thanks again!

Comment by Kathy C. on May 28, 2010 at 3:07am
Wow, I feel like a just read a great short story book. What a Father, a man who would rather sacrifice a treasure of his, so that another human being wouldn't suffer because of it. Thank You for sharing.

Comment by wiffledust on April 12, 2010 at 1:23pm
thank you so much, rick. and thanks, ericka! you know alot of people think my dad was kind in this story. and my dad was a very kind man, that's for sure. but is it really such a sacrifice to pick a different car compared to her sacrifice in a concentration camp?

Comment by Ericka Gray on April 12, 2010 at 1:21pm
This was very moving. The memories you have are priceless but even more so is your father's kindness towards your neighbor.

Comment by wiffledust on April 12, 2010 at 10:12am
good morning, dorraine, sheree, and helen! thank you so much for taking the time to read. your comments were a great way to start a day, believe me. sheree, i'm not sure of her age. they moved away when i was relatively young. but i would put her to be in the camp in her teens. much like anne frank. perhaps a few years older. you put it well about neighbors being part of our extended family. i am fortunate that i have good neighbors, but it think in general we don't view our neighbors that way the way we used to. when i was a kid everybody's business was everybody's business. everybody disciplined each other's children, everybody drove everybody everywhere, etc. we gave each other our extra food and stuff. now it seems like it's not cool to be as neighborly. but you're right, helen, that people are still as kind...but i wish it were more the norm!!!

Comment by Sheree on April 12, 2010 at 10:02am
Very emotional memories!! How old was she and do you remember what became of her?
I think the word "neighbor" doesn't really mean the same thing as it once did. The neighbors of my childhood home were people I knew well and visited frequently. The neighbors of my adulthood are people I wave to on the street or talk to in the yard. And while I do often have the windows open, I am often very cognizant of the noise level lest I disturb a neighbor. It's sad, but I think we've lost the willingness to include those who live in our neighborhoods in our extended families as our parents did.

Comment by Helen on April 12, 2010 at 9:38am
Wow, Lisa. Thanks so much for sharing your story. I believe that such kindness can and does exist today, but it's my hope that we can all work to making it more common. That comes from each individual. You can't control how others act or feel, but you can control yourself. You can choose how to react to things everyday, and choosing to be grateful for those memories was a great choice.