As the two blue collar workers and recently laid off teacher sat at the Governor's table, they feigned interest as the pompous politician stood and proclaimed with a sly grin, ""Don't attack my dog or you might get shot ... if you're a coyote!"

Waxing and waning, he went on to regal the captive audience with how he always carries his .380 Ruger loaded with hollow point bullets when jogging on trails because of his healthy fear of snakes.

'Snakes' thought the former teacher.  'Snakes, how appropriate.  This man has the unmitigated gall to tell jogging stories while each major school district in the state of Texas is laying off thousands of good teachers! He does seem a bit reptilian to me, come to think of it.

She looked down at her plate and noticed a single piece of white breast meat lightly browned from a contributing fowl of some sort.  Picking lightly while endeavoring to hold back the slow burning sensation her neck felt as her blood began to boil, she began to flick little pieces of crisp skin at the Governor each time he looked in the direction of the carpenter and day laborer.

'What the hell is she doing?' wondered the day laborer noticing several bits of fried skin attaching themselves to the Governor's pants.  'This lady is out of her head!  I am just happy to be eating dinner.'

'If I aim just right...I might be able to land a sliver on top of the jerk's perfectly quaffed hair,' the teacher dreamed.

The carpenter had noticed the antics of the teacher and silently became a willing partner in her unusual political protest of a greasy nature.  He smiled and chuckled at all the appropriate moments, encouraging Perry to focus his gaze upon, what he thought, was a person who obviously was of like mind and enjoying his asinine patter.

'I would love to see a piece hit him right between the eyes,' dreamed the carpenter as he laughed out loud purposefully garnering the undivided attention from the rambling politician.

And then it happened, just as the undistinguished long time head of state turned toward the teacher she launched her coup de grace aimed quickly at his head.  A devilish turn of fate landed the large brown flap of skin right into the open mouth of the long winded Governor!

"What the hell?"  choked the surprised host in the middle of explaining the 'knock down' power of different grains of bullets.  "Who did that?" he exclaimed as he spit out the sliver that did not descend his gullet.

'Bingo, a shot for ALL teachers!' The former educator thought as she politely continued as if nothing out of the ordinary occurred.

'It worked' the carpenter mentally mused as he continued his rapt attention to the Governor.

The day laborer stared at his empty plate thinking, 'What a waste of chicken!' 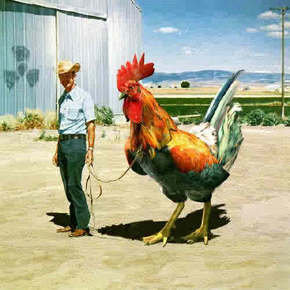 Comment by Lorraine Fowler on August 9, 2011 at 9:43am
What a great rendition of Texas Devil Governor...the one who holds the Bible in his right hand while he's lying, cheating and stealing from school children with his left. Bravo!!!