Weird wedding? Not TOO weird.

Probably not quite as weird as some (like the one we went to where the bride's large portrait was featured in front of the appetizer table), but there was one...the bride forgot her slip, but the minister wouldn't let her run home to get it.  Might not have mattered with a "normal" wedding gown, but this was gauze...  He was probably just concerned that the wedding might "run over" - not good since he'd decided to squeeze this young couple in (she was 22; he had turned 21 a week before...and no, they weren't pregnant, although they never were sure the minister was convinced!).  The minister took the rings (very thin, inexpensive white gold bands) and put them in his pocket, which would have been fine, except he'd also put change in there.  Made for some comic relief for the still slipless bride, but I'm jumping ahead.  No Wedding March - the minister almost trotted down the aisle, with the bride and groom trying hard to keep up behind him.  He'd told them to kneel when he said, "Let us pray."  Would have been even better if he'd told them he was going to say it 4 or 5 times before they were to actually kneel, so they kind of looked like horses on a merry-go-round...down (minister's head would shake) and up again...3 or 4 times.  Then came ring time!  Okay, here's a dime...and a quarter...FOUND ONE!!!  Finally...rings were exchanged, promises made, I dos said and they were officially Mr. and Mrs, running out of the church almost as quickly as when they came in.

In 15 days, we'll have been married 38 years and we're still having fun! 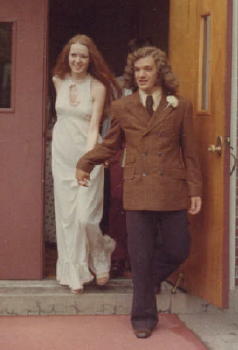 Funny thing about that slip - I totally forgot about it when I saw the flowers my husband got me.  (VERY untraditional wedding, very 70s!).  I'd asked him to pick me some daisies.  He didn't, but found a florist who made up a bouquet of them for me!

Comment by Maryanne Mesple on June 6, 2011 at 9:58pm
great story/memories! I can so relate to the forgetting the slip when you really should not forget "the slip"! Thank you for sharing .. I felt like I was sitting in attendance :-)

Comment by Ericka Gray on June 4, 2011 at 6:49pm
That was such a sweet story! You guys looks so happy, young, and clueless! Those were the days weren't they?