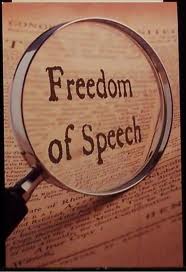 I know you were looking for some kind of road stories, Lisa... but road stories are better told when being reflected on. They come in snippets of information that need to be stitched together to make any kind of sense... like a series of white lines that only turn into a highway when you've backed away from them a little. Meanwhile, I want to chime in about everybody's current favorite scapegoat... Rush Limbaugh.

Everyone, including Rush himself I'm sure, knows he's a blowhard. Matter of fact, he's a professional blowhard, who gets paid very, very well to express his opinions in an outrageous fashion. And the more outrageous he is, the more money he makes. He figured this simple equation out years ago. There are parts of the country where you can't hear anything but Rush Limbaugh on the radio. He's got a huge audience, and is in fact an industry unto himself. He makes boatloads of money for himself and everyone associated with his show by saying things that drive "liberals" into a tizzy.

And liberals accommodate him all too well. Now that the iconic "liberal" (remember when he used to be "politically incorrect" until he changed network affiliations?) Bill Maher has called for a truce, and no doubt the sheep-ish left will fall into line in due time as one of their hallowed media "leaders" speaks out. Once again, a national hissy fit has been thrown, not a thing has been accomplished by it, and everyone can go back about their business. Until, of course, something else deemed worthy of a hissy fit comes along, and oh so predictably, it will be thrown.

I think it's funny that musical artists are pulling their songs from being used on Limbaugh's show. The guy's been an outrageous, offensive liar for decades now. All of a sudden he's crossed some line by calling a woman a prostitute and a slut? Puh-lease.  The reason for this mock outrage is of course the musician's in question not wanting to be tainted by the misogynist label that Rush has so rightfully been tattooed with. In other words, they don't want their brand to lose value. I haven't heard Chrissie Hynde from the Pretenders threaten to pull her song, which is the theme of the show, for which I have no doubt she has netted hundreds of thousands if not millions of dollars. Funny thing is, even though she is probably listed as the writer, it's merely the guitar riff that Rush uses. I doubt the guitar player got any writing credit (I may be wrong), and thus suspect he receives none of what must be a substantial royalty payment quarterly. As Jackie Lomax told me one time, "we're all whores in this business." Oops. Can I say that?

Bill Maher is certainly no exception. I think he's very funny and insightful, but he hawks his wares more shamelessly than anyone else I can think of. He's also bandied all kinds of potentially offensive (and totally misogynistic) phrases about in attacking whoever he chooses to villify or denegrate. He'll also readily lie if it serves his purposes. His recent diatribes about Mormonism being a non-Christian cult are an example. And he's smart enough to know that if Limbaugh goes down (an ugly concept, I know) then another easy target is taken away... and Maher will make less money.

If one really believes in freedom of speech as protected in the First Amendment, then Rush should be able to say whatever the hell he wants to. He should be able to call anybody whatever name he wants. He didn't threaten anybody, as far as I know. Seems to me that the hysteria is merely further expression of the national schizophrenia that cripples our country, with the left attacking the right and vice versa, until little of any value is accomplished, or even said. Common sense is left by the wayside, meaningful dialog is non-existent, and we as citizens continue to act like undisciplined children. And meanwhile, the money making machine rumbles on.

i was just thinking. i have always been a big supporter of bill maher, howard stern, et al even when i didn't like what they were talking about. free speech is paramount to me. but hate speech...and i really feel that is what rush has been engaged in....is very dangerous. what is repeated over and over and over again on public airwaves becomes its own form of reality. i think that at the end of the day it's the audience that decides if these people should stay or go. the sponsors want rush to go. the audience wants him to go. at least that is what it looks like right now. who knows what tomorrow will bring.

and i respect your point of view.

I respect your outrage.

the public is free to rally around any injustice they see. i'm not all a twitter over this. i'm outraged. you don't have to agree or be outraged, but i am.

If it's such a cut and dried thing, then the courts should handle it. You talk as though it's a given that what has been said is illegal and life threatening to the woman involved... and you're saying that he's inciting the public to riot.... or at least you could make that case.  If that were the case, then Limbaugh would be shut down by the FBI in a heartbeat. I don't think you're the judge of the legality of his words, nor am I. If the lady wants to file suit, or have him arrested, or whatever, then that's her business. That's what we have a legal system for. What happens these days is everyone gets all a-twitter, and there's this kind of mass internet lynching that takes place. It's a total mob mentality that has little if anything to do with constitutionality or legality. It has to do with people taking it upon themselves to be the prosecutor, judge, jury and executioner. And scrambling to be on the politically correct side of the issue in order to protect their own interests. And it is, quite frankly, embarrassing as an American to witness. If Rush Limbaugh has broken the law, then he should be prosecuted under the law. It seems to me that she came out and made a public statement. He responded, and I'd be angry at his response too. But he didn't just randomly pick her out of a phone book. He called her some unseemly names, made some tasteless suggestions as to what she should do... and subsequently apologized for it. We shouldn't go bending the laws to fit our own agenda.

hey i'm a big believer in free speech. but not when it's illegal. in this case, it's illegal. he's attacking an individual woman. on public airwaves. he's attacking her character and setting her up for violence. i could make a good case for rush inciting riot in this case. it is nothing like maher in my opinion. and no, it would not be hate speech to call catholicism a cult. it would be an opinion of a philosophy. it would be intellectual idea vs intellectual idea. not a guy with the public airwaves against a private citizen. offensive is not the same thing as illegal. we're allowed to be offensive. free speech covers offensive. it doesn't cover this.

The fact is, he does have a right to a mic other people pay for. He's making those people a tremendous return on their investment. The public can call for the sponsors to be pulled, and new ones will take their place when the furor dies down. At very best, Limbaugh will resign... and a new blowhard, probably more offensive, will take his place. There are lots of things the public en masse should be up in arms about. Rush Limbaugh calling a woman a slut is just not one of them. It's an insult, for sure. Rush has been called a big fat idiot. Is that hateful? Probably. Is it unconstitutional? I don't think so. Is it true? Possibly. Who cares.The usual foaming knee jerk response of the so-called "left" merely polarizes the country more. And re. calling Mormonism a cult... really? If you called Catholicism a non-christian cult, would that not be construed as hate speech by many Catholics? I mean, with the conehead hats and the incense stenchers and the weird chants... look whose talking. All of Christianity is a cult, basically. Same with all organized religion. Maher knows that, and has said as much. Maher is just serving his own interests in order to stir up a hornets nest. Just like Limbaugh. Maher is right about one thing, though... the "left" is embarrassing itself with all the furor. And of course he's jumped in the middle of it in order to garner himself more publicity, and thus make more money. And as per the musicians... well, they're making money off Limbaugh's tirades, and have been all along. Seriously... I wanna see Chrissy Hynde pull the theme song. Then I'll be impressed with the great moral outrage of the musical community. We have to be careful how we define "hate speech". Is it alright for a rapper to use the "n" word and a KKK member not to? Is it alright for a woman to refer to another woman as a slut, and not a man? Can homosexuals refer to themselves as "queer" and heterosexuals can't? Is one person's hate speech another's figure of speech? For a group ostensibly all concerned about protecting First Amendment rights, the so-called "left" seems in a big hurry to take some people's First Amendment rights away, if they are politically opposed to them.

i get your point, david. and it's one i thought about awhile before i came down hard on rush. and, frankly, it's one i've thought of with bill maher too. i think he crosses lines often. however, bill is very clearly a comedian. i think if he had to list a profession that is what he'd say. which i find different than "radio host/entertainer". hate speech is not protected under the first amendment. not without restriction at least. the asses that want to protest gay funerals even have to do it from so many feet away. calling mormonism a non christian cult is not hate speech. it's an opinion. calling a specific woman a slut and demanding he can watch her having sex on public videos is hate speech. that woman is not in a business. she is exercising her right as a citizen to testify to congress. at least in my opinion. ...your point about the musicians is very interesting. i found that funny too. i can't imagine why they were there in the first place. but then, i can't understand why the girl scouts were a sponsor on rush either. even if we went with your opinion that rush should be able to say whatever he wants to...and he's not and nobody in this country every has been able to do that under this constitution....it's perfectly legit for the public to call for his sponsor to be pulled and rally to fire him. he doesn't have a right to a mic other people pay for. of that there is no constitutional disagreement.