Review for the movie, War Horse

For those of us who love animals, this movie will earn your respect and admiration. A glowing portrayal of the lifelong bond between a boy and his horse, even when separated.

War Horse is directed by Steven Spielberg, so you know you’re in for one high adventure ride. It begins with the friendship between an amazing horse named Joey and the young boy, Albert, who trains and tames him. Albert is laughed at by the rural England farm community when he hooks the horse up to a… 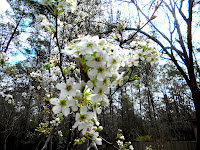 A pear tree drapes herself in white lace,
Blushing behind clouds as she slips on her garter,
Preparing to renew vows to Spring.


A hard mint winter is finished
She trembling in breeze,…
Continue

A good fire is stunning. I’ve been known to burn leaves just to see flames lick the sky. In my opinion, there's nothing finer than sitting around a campfire on a crisp evening, hearing conversations and laughter of family and friends. Or inside, when windows are iced, fireplace roaring, wood snapping and crackling. It warms bones and hearts…

When winter laughs at her icy secrets,
and blows her ragged skirt,
Rose, once adorned in red velvet,
whispers, “I was a queen.”

Winter howls and her branches droop.
But blackbird arrives, festive as… Continue

A Garden in the Wild 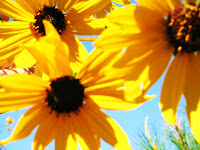 I’ve never met a garden I didn’t like, although some I’ve taken to more than others. Growing up, we always had a huge vegetable patch, which we had to toil in, so on hot, sweaty days I didn’t favor that kind.

There is another… Continue

Ruts in the writing life happen. We grasp our way through a story, do the research, and realize it’s not the one we’re supposed to tell. At least not yet. We bump along in that rut for awhile until a new path


appears, scattered with red and…

Stars like jewels seed the sky
Blooming flowers drenching the black bed of night,
Shining above creeks and rivers and dreamers
Resurrected until the sun turns them transparent.

But you can drink them while they’re fresh
On a blanket tossed on the ground,
They… Continue

“Are you telling me those albums I sold for practically nothing at a garage sale several years back are now worth something? Dang, I knew I should have hung onto those.” This was a recent conversation I had with a dear… Continue Many people collect things, from paintings, to baseball cards, right down to magnets.

I collect memories. Maybe you do too.

We don’t have to shell out much money for those, although some have cost more than others. The limit is the moon. I’ve been chasing down memories for years, and they are now sitting on porches,watching the sun rise. And I’m thrilled they are remembering, lest I forget. …

Trains have always fascinated many. Runaway cabooses, passenger cars filled with drowsy diners, or boxcars brimming with wild hobos, transporting all far off to fragrant destinations. Yes, there’s something mysterious about a good train ride.

A few years ago, we took the famous Colorado Narrow Gauge Railroad excursion from Durango to Silverton-fifty-two miles of the San Juan scenic byway. The choices varied on how classed… Continue

Now that summer is here, I hope you’re able to kick back,splash in a river, listen to some music, or just read a good book.

Speaking of books, I did manage to finish that second… Continue Testing, testing, can you guys hear me? I couldn’t think of a snappier way to present sound than a recent trip to southern Louisiana.

In New Orleans the decibel levels flew off charts, right along with history, dog ugly and gorgeous as any I’ve ever heard. Even so, I relished the whole Who Dat and Zydeco music and the waitress named Nicole but pronounced Ne-cole. Her inflection piped out like a shot of New York swirled with Louisiana… Continue

When my middle child-a mama’s girl- started kindergarten, she clung to my waist like lichen on stone. The separation for us was painful, me leaving her, crocodile tears in her eyes, a little waif dressed in tiny jeans and a yellow shirt sprinkled with daisies. I’d done my best to prepare her. She’d been… Continue

Even so, they are rich visual collectors. Two blue, brown, hazel or green mini artists, taking in life portraits, freeze framing them into memory… Continue

Come to your Senses

To me, being in a wild world with so many sights, sounds, odors, tastes and textures is a little like walking down dusty paths of a renaissance festival and being bombarded with the scent of apple dumplings and roasted turkey legs while my ears buzz with pan flutes and tambourines, all as I’m…
Continue

Something thrilling will happen soon and it has to do with nature intoxicating us once again with her charms. Right now old man winter has his white woolly blanket thrown over landscape's bed but hang on tight and a fresh morning will soon arrive.

Covers will be flung back, the bed sun-warmed. And then, popping through a steamy mattress of soil will be vibrant pink and yellow ruffled tulips and perfumed roses and multi-colored…

When I’m older, I might open a bakery. But for now cooking is just another one of those passions of mine. For all I know, it may be the only reason I have friends. I give them stuff, see. They want my lemon custard pies and raisin cookies and cinnamon rolls. I have a particular friend I call, Chick-a-pee, who is quite enamored with my skills. We don’t exchange birthday presents per se, but every year for her celebration, I make and deliver a… Continue

I am in love. With shoes. My closet is chock full of pumps, boots, and shiny flats. Every time I see a shoe store I get the urge to yank my car over and partake in the rapture of finding that new pair. Maybe I need a twelve STEP program. It’s about the only materialistic thing I have a problem with and I rationalize this because, by gosh, these shoes DO take me places. Obviously I’m not alone with this addiction. Go to any shoe store and you’ll…

Gutsy and kind-the world would have us believe this is a rare combination, that these people aren’t completely trustworthy. I ask you, who is? Show me a perfect person and I’ll kiss a gecko! I don’t expect I’ll ever have to do this. I’m terrified of them. And I’ve yet to see perfection, not in life, people or love. But despite this, we can accomplish more than we realize.

Oil pop, pop, popping, mushrooms, carrots, snap peas, shrimp big as butterflies, spicy chicken, red chilies’ flung in a huge steel pan, dancing together like a hot cha, cha, cha. That symphony of image and scent, going down on a Saturday Texas night. Like jazz with maracas thrown in. No, not a concert, but sitting ringside at a Japanese eatery, savoring the show. We only got the seats because tables were full. Just what I wanted but…